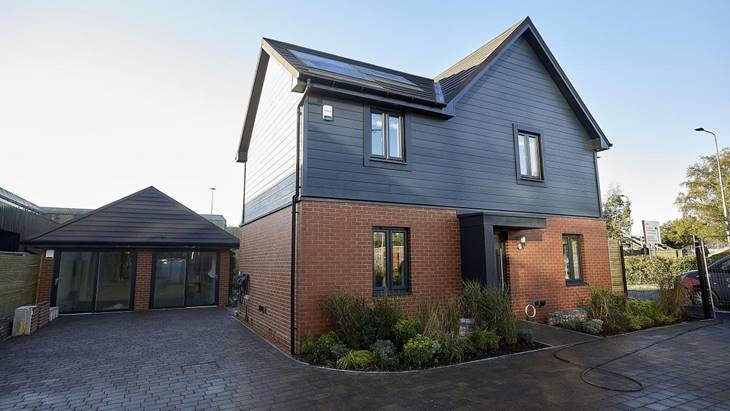 Barratt Developments, a partner on the AIMCH project, has built a zero-carbon “home of the future” as the industry prepares for a new, more eco-friendly era of housebuilding

The flagship concept home, in Salford, has been built using modern methods of construction to show off what is achievable for mainstream volume housebuilders.

Alongside AIMCH and 40 other Barratt partners, the company is using the “Zed House” to better understand what might work in future developments and what the supply chain needs to do to prepare itself. “We want to showcase what can be done to deliver zero-carbon living using the latest technologies and working with the best industry partners,” David Thomas, Barratt’s chief executive, said. “Ultimately, the aim is to find solutions to enable the industry to build high-quality, zero- carbon homes that customers love, at scale.”

The home, part-funded by the government, features overhead infrared panels that give off instant zero-carbon heat, a fridge that controls the humidity to reduce food wastage by 60 per cent and electronic taps that are claimed to be able to cut water usage by 80 per cent.

The skirting boards are all heated, giving off 10 per cent more warmth than a typical radiator, and British Gypsum has developed a plaster that traps toxins in the air.

The project is testing out a shower designed by Kelda Showers, which uses less than half the water of a standard mixer shower but gives the sensation of a greater spray force.

That is all on top of the usual solar panels, electric vehicle charging points and an air source heat pump, which transfers heat from the outside to water.

Less high-tech solutions have also been used. Johnson Tiles’ typical bathroom products are 1cm deep, but it has made ones that are only 0.8cm deep for the Zed House, reducing carbon emissions by 20 per cent. Handles on the kitchen cabinets are made out of coconut husk, the worktops feature 100 per cent recycled chipboard and the downstairs walls have been made off-site with the windows fitted in a factory, which Barratt reckons halves the build time.

The house also boasts a biodiversity garden that has nests for bats and swifts, as well as a pond, “hedgehog highways” and a green wall. Set on the main campus of the University of Salford, one of the university’s scientists will stay in the home to measure its energy-efficiency and to make sure that it is practical.

The government’s Future Home Standard aims to ensure that all new houses from 2025 will produce 75 per cent less carbon emissions than existing new-builds. Barratt expects the Zed House to “substantially surpass” this standard by delivering a 100 per cent reduction plus another 25 per cent drop in emissions linked to lifestyle choices, which would make it the first home in the country built by a leading housebuilder to do so.